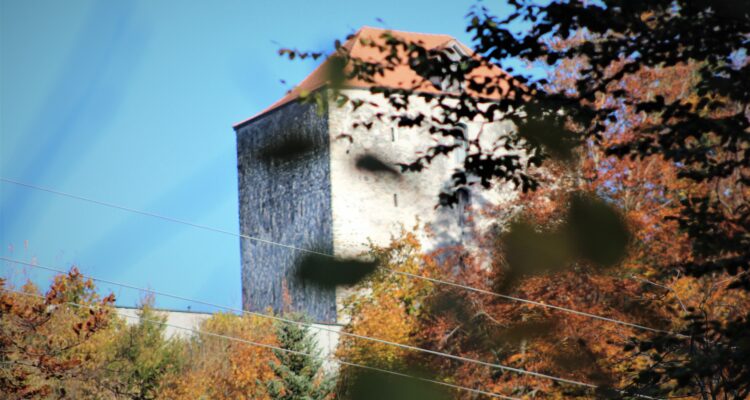 An Autumn Glimps into History

Many talk about story-telling, and be it occasion or pretext, formally speaking, « content » is put into a somehow readable relation to a time-line. But frankly, is this already menaingful? Does it touch someone?

The stories our lives tell are on the other hand often in the background of attention. A recent example :
Bright-shining, golden light of the autumn sun brought me out to the banks of the Kander, Bernese Oberland, to a place, about 500m before it makes its way to the Lake of Thune. And like a metaphor of its own highly reduced perception in the history books, the somehow forleorn remainders of the castle of the Lords of Strättlingen looked over the treetops. Blurred, as it were, by the floodwave of modern-times necessities and all «content» history-writing has dragged to the foreground of our attention over the past centuries.

Who were they ? And what is our relation to them?

The «Strättligen» first appeared during the 12th century, being closely connected to the dukes of Zähringen (Freiburg, Bern, Burgdorf, Thun) and the imperial House of Staufen. They owned larger territories in the Bernes Oberland, in particular in the Lower Simmental and the Kandervalley, including Frutigen and the «Tellenburg».

Like many others they spoke several languages (certainly : medieval German, Latin and French). Some got engaged in the cultural activities of their times, such as « Minnesang ». Hardly anyone realizes that one of them around 1250 (Henry II.) lorded over the well-known town of Spiez, and was renwoned for his poetry.

Some of his sons followed their French relatives to serve the « Savoyards » and later even the Normanic English king Eduard I., who for decades would speak nothing but French an Latin. These are all historical records. No fiction.

Those emigrants were very close to the English crown and adopted the name of « Stradling ». So, a littel after 1300 a Sir Peter of Stradling acquired the Welsh St. Donat’s Castle, and the English «Stradlings» survived their Swiss ancestors for almost 400 years.

It strikes me every now and again, that I know both castles, both areas in some detail, both – no all – languages in considerable detail. St. Donat’s castle today holds «Atlantic College», one of my first places of study.

Frankly, reading history from «this side», reading it from «how am I concerned», can change our relation to it.

Type to search or hit ESC to close
See all results