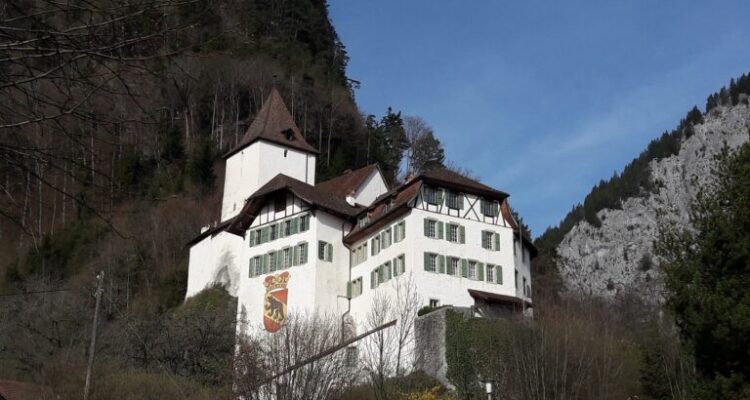 The 68-year-old woman had gotten up one last time. She had endured the morning dressing procedure, for which she already needed help, because she had become frail. She traveled to her homeland for the last time in late summer, to Burgundy, from which the Swiss cantons of Vaud, Bern, Fribourg and Geneva as well as the French province of Franche-Comté emerged. One last time she had visited important places of the empire over which her father and brother ruled. Important for her own life, decisive for her legacy.

These regions would not only include her place of birth, Orbe near Yverdon, but also Payerne, where Adelaide had buried her mother Bertha almost 40 years ago. It is known that she also visited the monastery of St. Maurice, where her father had been the lay abbot for many years. Only a few years before this last trip of her senior life the woman bequeathed some of her personal favorite places to the monastery in Selz in northern Alsace, including her properties in Simmental, Matten (St. Stephan) and Wimmis.

But what a life this woman had led: When she was born in 931, her parents Rudolf II. of Burgundy and Bertha, her mother, were still “wandering kings”, all around a huge area that stretched from today’s French province of Franche-Comté to the Swiss cantons of Geneva, Vaud and Neuchâtel and reached as far as the Bernese Oberland. But the ostensible idyllic life soon ended: Her father died much too early, and at the age of 16 Adelaide was married to a man who was indeed an Italian king, but also the puppet, so to speak, of the early mafia powers in northern Italy and also an overtly unfaithful husband.

At the age of 20 she unexpectedly became a widow for the first time. But she herself, as the keeper of the Lombard crown, however, was able to determine the future Italian king, and so she was kidnapped and locked in a castle when she refused to make the preferred candidate of the ruling clans Italian king – by marrying her.

The young mother (her daughter Emma, ​​who later became Queen of France, was around three years old by that time) managed to escape together with her child.

Seeking help, she turns to a friend of her family, the Saxon Duke and East Franconian King Otto. Otto, having lost his first wife lately, the English princess Aegditha, probably saw a double chance in the state of affairs: He advanced into Italy with a huge army, defeated the clans, freed the young woman waiting for him at Canossa Castle and married her in 951 in the coronation city of the Lombard kings, Pavia. With that he had won both a beautiful woman and rule over

With this coup he had not only won both a beautiful woman but the rule over northern and central Italy, as well. And the 20-year-old mother of little Emma was suddenly not only (again) Italian Queen, but also Queen of Eastern Franconia.

Empress Adelheid and her husband Otto I (Meissen Cathedral)

Only four years after their marriage, her husband Otto had to endure a battle that would change the face of the continent: The united German tribes of the Saxons (of which Otto was Duke), the Bavarians, the Alemanni and the Franks in 955 defeated the pagan Hungarians who had devastated entire landscapes in Central Europe for decades, on the so-called Lechfeld near Augsburg.

Not only Otto’s position as King of the East Franks (who were increasingly referred to as “the Germans” from this battle onwards) has remained unchallenged since then, but the defeated Hungarians also radically changed their lives and religious beliefs: They settled down (they had previously lived nomadically) and adopted Christianity.

Triumphant years followed in the life of the young woman, who was then in the prime of her life: in 962 she and her husband became co-rulers, emperor and empress, of the Romans and Germans as an equal partner (Latin: “consors regni”). And in addition to her brother Konrad, she kept a number of Burgundian royal estates as personal property: the two ruling families were friends, after all.

Shortly after Easter in 973, which Otto and Adelaide had spent together in Quedlinburg (in what is now Thuringia), her husband Otto died. Their son Otto II was proclaimed king the very next day, and suddenly a 42-year-old “queen mother” was born. Adelaide again had again become a widow.

A year earlier, their son Otto II had been crowned Roman emperor together with his Greek wife Theophanu. Then, for ten years the Empire saw the strange constellation that it had one king and one emperor, but two empresses. When their son Otto II died in 983, the two women – like a senior / junior couple – continued to rule the empire by mutual agreement.

They even expanded the empire in the west (Lorraine) and in the east, against the Slavs. But in 991 Theophanu also died, unexpectedly at the age of 35, while her son (he was then called Otto III) was still a minor. For four years, the ruling empress Adelaide exerted full imperial power all alone.

And slowly and almost imperceptibly she passed the de facto rule to her youngish grandson Otto III.

The end in Sight

It was Otto III. who, at the end of this period, in 994, handed over the royal estates in Matten, Wimmis and some other Bernese places to the Selz monastery Adelaide had founded in the meantime. The initiative for this move came from his now 63-year-old grandmother. And one can only assume that she foresaw the turmoil of the following century and she did not want to allow her family’s inheritance to become the plaything of the the rising powers of future days.

On might suspect she thought she could rely on the Selz Monastery, which she herself founded, more than anything else. Indeed, the Selz convent seems to have held a unique position among the Franco-German monasteries of the Middle Ages.

In her last days Adelaide withdrew from all offices – in close contact with the Burgundian monasteries in Cluny, Payerne and St. Maurice. And, as described at the beginning, in the late summer of 999 she visited the places and the people that were most important to her for the last time.

Her travel route is precisely recorded by an eyewitness. Nine days before the last Christmas of the first millennium, and only approximately two weeks before the beginning of the new millennium, the Christian West was in deep inner turmoil: A great many virtually awaited the end of the age, the last judgment and the second coming of Christ, who in almost all ecclesiastical representations of the previous centuries had been depicted as THE coming King par excellence. As the “Pantocrator”, the “All-Ruler”, as the King of all kings.

And in those days, no one escaped the almost panic fear and the excessive apocalyptic expectations of the time. But the sixty-eight-year-old, Adelaide, who stopped breathing on a wintery December day in 999, probably saw this king earlier than everyone else around her. The Roman empress, East Franconian and Italian queen and for long-time the sole regent of all these countries, the Burgundian princess Adelaide died on December 16, 999 in Selz Monastery, 1020 years ago.

Type to search or hit ESC to close
See all results